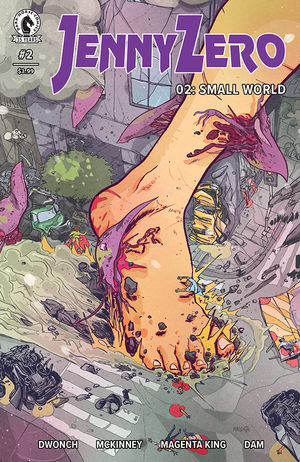 In Jenny Zero #2, while the protagonist definitely has authority issues, the authority also has issues with her. Quite a few issues, really.

The first issue of Jenny Zero features our titular hero Jenny Tetsuo being a party beast. She hangs out with her rich best friend in nightclubs, guzzles down alcohol like water, and seems to be trying to have sex with as many guys as humanly possible. That all comes to an end when a bunch of kaiju attacks her city. She then goes to fight said kaiju with a weird bio-gun thing but ends up losing. Her CO then decides to shoot her. Great move, except, apparently Jenny then turns into a kaiju herself? And now we come to the 2nd and current issue, where we see what’s that all about.

You can purchase Jenny Zero #2 at Dark Horse Comics for $3.99. The comic goes on sale on June 2, 2021; so get it then if you’re interested in this slightly disturbing superhero tale.

Warning: spoilers for Jenny Zero #2 below. If you have any interest in reading this, hold here, and continue once you’ve done so.

So Jenny Tetsuo finds herself suddenly a kaiju at the beginning of Jenny Zero #2. A big, humanoid, naked, and very obviously female kaiju. Yeah, she isn’t happy about that, but fortunately, the hostile kaiju around her provide some effective stress relief. She actually manages to kill the biggest kaiju with the help of her oddly cute bio-gun thing and ends up saving the city.

Only, that isn’t the end of Jenny’s problems in Jenny Zero #2. Now she has to deal with the fact that her organization, and by extension her uncle, has been lying to her about her very existence for her entire life. News flash: she doesn’t take it very well. In fact, she takes it so not well that she just stomps out of the building with her best friend in tow. She then hides out with a said friend (and her dog) at one of the latter’s hotels and reminisces about the good ol’ days (and some bad ol’ days while they’re at it).

And then Jenny’s kaiju-fighting organization decides to hold the idiot ball and try to force Jenny back into service. With guns, no less. The only reason Jenny escaped was that she’d left the hotel hours before the group of armed thugs arrives, only her best friend is now in the hands of said armed thugs. They probably won’t do anything to a said friend due to her wealth and prominence, but I wouldn’t bet on that. Plus, there apparently seems to be something rather…off about Jenny’s dog. It seems the organization thinks the dog is the key to controlling Jenny’s actions. How? Well, apparently, we’re just going to have to find out in the next issue of Jenny Zero.

I actually find the relationship between Jenny and her best friend Dana to be one of the best features of Jenny Zero. It’s pretty clear that the 2 of them are pretty close. Also, while Dana does enable Jenny’s party-going behavior to some extent, she also understands that it’s an outlet for her emotions, and she tries to keep Jenny safe throughout her party-going. It’s especially obvious that Dana is at the party mostly for Jenny’s sake since her flashback shows her not touching a drop of alcohol even though she could’ve easily done so along with Jenny. I really do think those 2 have some good yuri potential, and it’d be cool if they did get together as a couple at some point.

Also, I rather like Jenny’s bio-gun thing in Jenny Zero. I don’t know why, but I find it cute. So sue me.

Jenny’s kaiju-fighting organization seems to really love holding the idiot ball in Jenny Zero #2. Okay, so they just revealed to Jenny that they shot her, and have been lying to her about her nature for her entire life. Naturally, she wants to quit the organization when there’s no kaiju to fight. So what do they do? They send an armed group of thugs to basically force her to work for them and to do whatever they want. Yes, clearly, antagonizing the woman who can turn into a kaiju is a great idea. Even worse, they even decided to try and threaten Dana to reveal Jenny’s location. While it was an attempt and they don’t follow through with the threat, making the threat in the first place was just stupid on top of being worse than useless.

Way to shoot yourselves in the foot, guys. I’d seriously doubt their ability to respond to kaiju attacks at this point. Although that could be why the world of Jenny Zero seems to have so much trouble with kaiju, if this is the caliber of people fighting for them.

Jenny Zero #2 from Dark Horse Comics is an okay next issue, continuing off from when we last saw Jenny as a kaiju. I feel like her kaiju–fighting organization is holding the idiot ball in this issue, and really need to work hard to redeem themselves in the next. Or maybe they don’t. Maybe they’re supposed to be unsympathetic thugs. I don’t know. I guess we’ll find out when the next issue arrives. 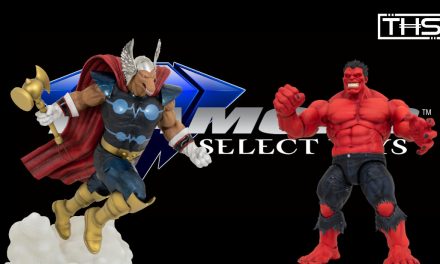 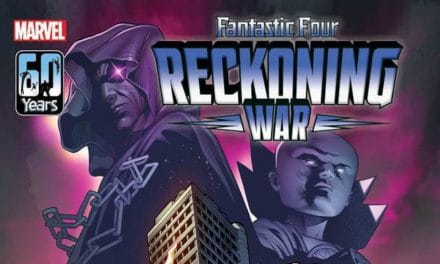