It Chapter Two‘s thrills require a believably frightening Pennywise, and thankfully Bill Skarsgård is up to the task. He proved his chops in the first part of the Stephen King adaptation, but he ups the ante in the second. But however fascinating he may be onscreen, he is even more so offscreen.

When asked about his behind-the-scenes preparations for It Chapter Two at a press conference, the cast responded effusively. “He is very unpredictable,” Jay Ryan, who plays the older Ben Hanscom, explained. Though the actor did not take pains to frighten his costars off set, they were fascinated by his process regardless.

“When you’re shooting a scene with him in the getup as Pennywise, every take is completely different. There’s spit flying; he has a very frenetic energy. And you often have to remember that you’re shooting a film; to stay in it with them instead of just fall into his mesmerizing performance.”

Bill Hader teased how Skarsgård gets into character, but it was young Jaeden Martell who went into detail. The actor, who portrays young Bill Denbrough, described it as follows:

“The most intense part about working with Bill [Skarsgård] wasn’t even doing the scene; it was him getting ready to do the scene beforehand. Us sitting in the room together and him walking around and whispering to himself and laughing; just his posture and everything about him getting into character for the scene was terrifying.”

Becoming one with Pennywise’s headspace is no easy task, and Skarsgård is to be commended for his skill in weaving in and out. He craft a masterfully chilling performance for fans in It Chapter Two, but he also gave a master class in performance on set.

How frightening do you find Pennywise the Clown? Let us know your thoughts in the comments, and check That Hashtag Show for the latest news on your favorite films. 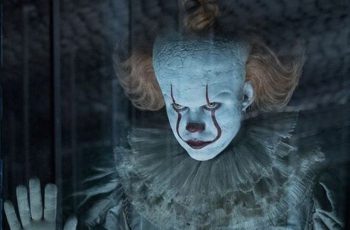