Story Synopsis: Kill Or Be Killed

Dylan gets a second chance on life after he survived a suicide attempt, but it comes with a price. A demon now demands a life must be taken every month.  Find out how an average graduate student turns into a killer in this week’s Comic Rewind, Kill Or Be Killed.

Dylan didn’t have a great life. He was an older graduate student, his best friend who was also his crush fell in love with his roommate, and that crush was now playing games with his heart. One night he decided he has had enough and it was time to end his life. He went to the roof of the apartment building and jumped.

However, on the way down he hit every clothesline and anything else that he could get snagged on. That and landing fresh snow saved his life.  As soon as he jumped he realized how much he wanted to live.  This was a chance to fix his life, but it came with a price. He snuck back into his room and didn’t tell anyone what he just did.

A Balance Must Be Restored

When he was going to sleep that night a demon appeared in his room.  The demon demanded a balance must be restored. Since the demon saved Dylan’s life Dylan must take a life every month. Paying rent on his life is what the demon compared it to.

However, the good news was that the demon said he wanted Dylan to kill bad people. Dylan of course thought he was hallucinating and the demon broke his arm to show that he was real. Either Dylan kills or Dylan will die himself.

Can Dylan take a life and what happens if he doesn’t?

Kill Or Be Killed was written by Ed Brubaker with art by Sean Phillips and Elizabeth Breitweiser. Image Comics published the volumes making up the story from 2017 to 2018.

Kill Or Be Killed Is About A Terrorizing Demon Or A Psychotic Break?

I enjoyed revisiting Velvet a few weeks ago so much that I decided to revisit this as well. It is just as good as I remember it.

The book starts out as a pretty straightforward life for a life kind of story, but it gets complicated really fast. We learned that Dylan’s father also saw a demon before he killed himself. His father was a pulp sci-fi artist and Dylan finds some of his old artwork. While looking through the art he finds paintings with the same exact demon in it.

This brings up the possibility that Dylan may be hallucinating the demon that he saw in his father’s old art. The entire comic flips back and forth from proving it is real to it is all in Dylan’s head. At the end I still don’t really know if it was real or not.

Kill Or Be Killed Never Turns Into John Wick

Dylan never becomes an excellent killer, but he does get a little better. I liked this and made the story more grounded. This could have devolved into Dylan becoming John Wick or something, but it never did.

The entire comic was a wild ride. I found myself rooting for Dylan and killing these bad people, but then rooting against him. So many times Dylan could have and should have stopped, but kept on killing. Everyone was collateral damage for his need to kill.  Friendships were destroyed and Dylan’s life was destroyed because he couldn’t stop.

This is an excellent non-superhero and non-noir Brubaker comic.  It is full of twists and keeps the reader guessing at what is real and what is Dylan’s delusion.  The hardest part of reading this comic was pointing it down. 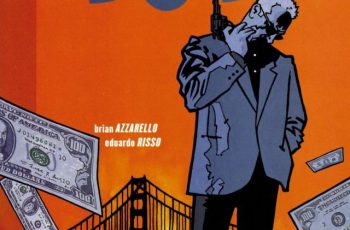 Story Synopsis: Jonny Double A private investigator named Jonny Double …
Jude lives the same day over and over without any …