Anna Kendrick stars in the biting satirical comedy, The Day Shall Come, which just dropped its first trailer recently. Writer and director Chris Morris (Four Lions) crafts a tale of incompetent FBI agents and the threats they “contain.”

As you can see in the trailer below, Denis O’Hare joins Kendrick in The Day Shall Come, where they play counterterrorism agents who hope to prevent the next national disaster. Thankfully, Moses Al Shabaz (Marchánt Davis) provides just the kind of radicalism they are looking for. Except he doesn’t believe in guns and has only recruited three other members and his wife (Danielle Brooks).

The trailer alone clearly seeks to lambast government agencies that become the threat they claim to protect their country against. But the message, which is “based on a hundred true stories,” comes ripe with laughs. One of those stories is the Liberty Case Seven, a ground of young black men in Miami who were accused of incite a war against the US.

Their supposed terrorism was more of a case of fraud, which seems to be the tack that The Day Shall Come is taking as well. Though it very well may be the government attempting to execute said fraud.

The pathos for Moses’ family is evident, and it’s important to note that comedy isn’t Chris Morris’ only strong suit. Chris has dabbled in various comedies. In addition to his comedy, his episode of Black Mirror, “The Waldo Moment”, is a particularly dark look into British politics wrapped in satire. The Day Shall Come will prove whether his insights about America are just as sharp as those across the Atlantic.

The Day Shall Come premieres in theaters on September 27th, but will also be able through VOD. Let us know your thoughts on the trailer in the comments. Check That Hashtag Show for the latest news on your favorite films. 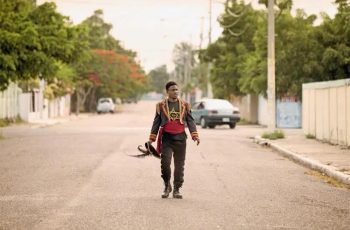 The Day Shall Come is a triumph of director Christopher …