The cover of Superman #14 shows a beaten and chained Rogol Zaar at the bottom of the page as a triumphant Superman, Zod, Supergirl, Superboy, and Krypto look down at him.  The writing reads “The final fate of the monster who killed Krypton.”

Over at DC’s own website, the description of this issue reads

“Lex Luthor is back in Metropolis—and he’s ready to wreak havoc! First stop, the most dangerous woman in the DC Universe: Lois Lane! Alone, her family a galaxy away, will Lois be tempted by Apex Lex’s offer? What does Lex have that this reporter can’t turn away from? Don’t miss this shocking new twist in the Superman mythos!”

Astonishingly, neither of these prophecies are in the least bit true.

The Pitch: Superman and his Super-Family finally take down Rogol Zaar.
Is It Worth $3.99? No. No, it’s not.
Unless you love throwing you money away, then Yes.

Let’s get into it.

Why Is This Book Meh

DC’s description of Superman #14 on their website states that Lex Luthor, Lois, and Metropolis would be the focus of this issue, however, none of the above even make an appearance in this comic.  So fine, a mistake is made, the wrong issue description is pasted in the wrong window, no big deal.

But 2 things here…
1) This mistake is sort a symbolic of the Bendis’s run on Superman as a whole; A lot of promise without any delivery.
2) I would rather have read that issue.

So, let’s get into the comic we got.  Superman and Co (Including Jor-El and General Zod) are fighting Rogol Zaar.  Remember him?  Introduced a year ago in Action Comics #1000, he’s a characterless bad ass who so powerful that he can take out everyone, but as the cover promises, after a year of floundering in and out of this story arc…this is his final fate.  Except it isn’t.

And I don’t mean that in the way that no hero or villain ever does or is truly gone… I mean on page 14 Zod and Supes co-uppercut Rogol, then Supergil hits him with his own axe (no blood or chopping, just hitting him), then after a panel of Jor-El watching, we see rogol for the last time, his face bruised and bloody, his eyes wide open. And then we get 7 pages of space politics that have nothing to do with the character.

At one point a Thangarian mentions “Rogol Zaar is in custody,” but that’s it. A character that broke out of the Phantom Zone and beat the snot out of Kryptonians has been placed in “Custody” after one of the weakest battles I have ever witnessed in comics. And DC/Bendis has the balls to call this “The final fate”. An off screen imprisoning?!

This is crap storytelling people.  Just garbage.
There isn’t much more to say about this issue… or this series really.
Skip it.

For more Comic book news, previews, and reviews and other pop culture content, check back to That Hashtag Show. 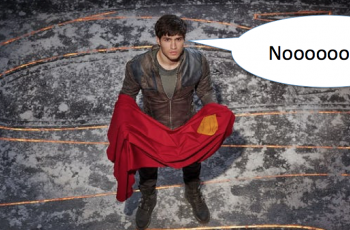 Have you been watching season two of Krypton on teh …

So begins the latest Crisis event comic line from DC.  …