As part of the festivities, NYC 2020 is proud to bring you all a brand new teaser trailer for the third season of American Gods. Let the mindscrew begin. Again.

This new trailer for American Gods gives us an interesting peek at what will come next in the third season. It’s a very mindscrewy peek, but it’s a peek nonetheless. From albino spirit bison with flaming eyes, to Mad Sweeney’s bloody corpse, the trailer does not let up with the mindscrews.

In that American Gods trailer, we see Shadow Moon trying to apparently run from his destiny after the revelation that Mr. Wednesday is his father. His divine father. Specifically Odin: the Norse god of war and knowledge, who sacrificed an eye in order to obtain knowledge of the world. Yeah, knowing that a god could’ve made your terrible life just a little bit better was a bit hard on Shadow. You can totally understand why he’d run away.

Only, Shadow is trying to run away from a god of knowledge with a pair of ravens as his eyes. Yeah, it doesn’t work out so well for him, since Mr. Wednesday/Odin finds him pretty much at the beginning of that American Gods trailer. Well, he does now call himself Shadow’s father, so I guess that’s a good development?

Other things the trailer shows is Laura Moon tearing her stitches open to reveal her distinctly empty chest cavity. You know, because she’s a reanimated corpse, aka. a zombie. Except, it’s not quite as empty as she thought it was. There is a definite golden glow coming from something within her chest. For all of you who’ve read the actual American Gods novel by Neil Gaiman, you all know what that something is. For those of you who haven’t, let’s just say that there’s a possibility that Mad Sweeney isn’t quite dead yet.

NYC 2020 gives us an in-depth look at the third season of American Gods, along with a stunning new trailer. I should warn you guys though that the trailer currently on YouTube by IGN is bugged. There is no audio whatsoever. I’d suggest waiting a bit for someone at IGN to catch that little mistake before watching it. 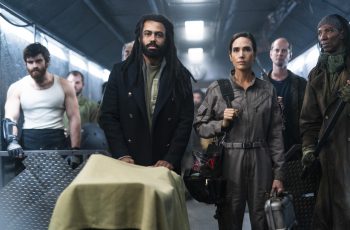 After coming off of a raucous railroad ride of Season …