If you’re a Star Wars fan, you’re already likely a fan of Jake Lunt Davies and might not even know it. His concept art has resulted in some of the more recently iconic characters, droids and ships of the franchise. (Remember D-O from The Rise of Skywalker?) His designes have wowed us and filled us with awe…. But a recent post of his just might give you nightmares. Even typing the words makes us cringe: Hairless Ewok.

As we all know Ewoks were controversial long before the Internet enabled viral discussion on the topic. Many immediately accused George Lucas of including the seemingly cute, teddy bear-like characters in Return of the Jedi for the sole purposes of toy marketing. True or not, Ewoks are part of Star Wars. (They’ve even been rumored to be getting their own series.) But… a hairless Ewok?

Hairless Ewok is the stuff of nightmares

Warwick Davis portrayed the most famous of the creatures, Wicket, in ROTJ. However, he reprised the role for a nostalgic scene in The Rise of Skywalker. As you can see in the photo above, the hairless Ewok is, well… disturbing. Its blank-slate rubber face invokes thoughts of Teddy Ruxpin having offspring with Michael Meyers of Halloween fame.  Or, perhaps, an albino Oompa Loompa. However you view Davis in his incomplete costume, there’s no denying its cringe-worthiness.

Sure, Lucasfilm stirred the Ewok controversy pot once again by even including the scene with Davis (and his son, portraying Wicket’s offspring) in the first place. The Rise of Skywalker already faced criticism for overindulgence in fan service Adding Ewoks might have been over the top. Plus, it resulted in us seeing this photo of a hairless Ewok. Sorry gang, there’s no way we weren’t going to share that misery. 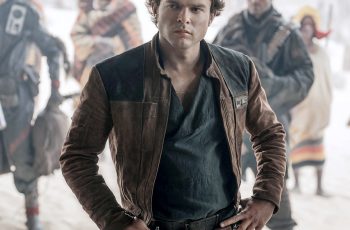