It’s time for some Rise of Skywalker bloopers!

One of the great aspects of Star Wars (generally) is how the films incorporate humor. (We’ll set aside the exception to that norm that was the attempt to do so with Jar Jar Binks.) The sarcasm, humor and chemistry among the original trilogy’s stars still remain unparalleled. Thankfully we got to some of that effect when Rey, Finn and Poe finally got some screen time together in The Rise of Skywalker. But…. There’s always something fun when it comes to off-camera comedy. We get to see some of that in some new Rise of Skywalker bloopers.

The First Order, throughout the sequel trilogy, was devoid of humor. Not so when it came to two First Order officers behind the scenes. In the video above, we get to see Domhnall Gleeson (General Hux) and Richard E. Grant (Allegiant General Pryde) yuck it up while filming. It’s refreshing to see the actors behind such serious characters have a little fun in the USA Today exclusive Rise of Skywalker bloopers feature.

“Myself and Richard had competitions to see who could forget their lines first,” Gleeson quipped of his clearly amicable relationship with Grant off screen. On screen, well, they couldn’t exactly be considered pals. As we know, Allegiant General Pryde was responsible for Hux’s ultimate departure. We even get to see some of that scene in the Rise of Skywalker bloopers.

Because Domhnall’s such a good guy, it was extremely enjoyable to pull status on him! To have a Star Wars gun to take out General Hux was an extraordinarily pleasurable thing to do.”

General Hux Knows All Reports are Domhnall Gleeson was wheeled … 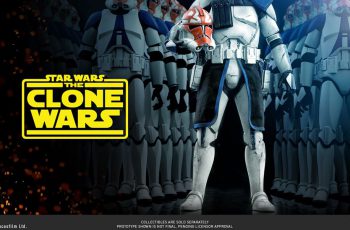 Good morning and Happy Star Wars day. It seems like …