Citizens of the 5 Empires are celebrating the 10th anniversary of the end of the Great Wars with It’s a Wonderful World. As one of their leaders, it’s up to you to develop your empire faster and better than your fellow leaders. From wind turbines and universities to espionage agencies and propaganda centers, your empire will prosper based on the decisions you make.

Will you reward your people’s loyalty by constructing a robust and thriving empire? Or will your opponents offer a better life for their citizens?

Building Your Empire in It’s a Wonderful World

Each player receives an Empire card that provides different resources and an end-of-game victory point condition. During the game players build their own empires, using resources from their previously placed cards. After four rounds of It’s a Wonderful World, the player with the most victory points wins.

At the start of each round players draft seven cards. Like other drafting classics (7 Wonders, Sushi Go!), players select one card to keep and pass the remaining cards to an opponent.

Next, players plan what they’ll do with their building cards. They either slate it for construction or they recycle it by discarding the card and gaining the card’s recycling resource.

Resource production happens simultaneously, but in a set order: materials, energy, science, gold, and finally exploration. For each resource, players announce their production total; the player with the most in each resource gains the corresponding character token (either a financier or a general).

Players distribute the resources they’ve gained onto the cards in their construction area. Any cards completed are moved atop their empire card and any construction bonuses are collected. Cards built on your empire card provide additional resources in later production phases. Some may also provide victory points.

The It’s a Wonderful World game ends after four rounds and the player with the most victory points wins. Points are awarded for those listed on the building cards in your empire. Some cards may reward points for certain types of cards while other cards give additional points based on the number of general or financier tokens you have.

It’s a Wonderful World takes its cue from the modern classic, 7 Wonders. Card play drives the action in this game and veteran gamers will feel like they’re in familiar territory during the drafting phase: choose one, pass the rest, rinse, and repeat. Your tableau will also look like 7 Wonders, with various cards atop your starting empire card.

However, this a next-step 7 Wonders, with more emphasis placed on resource management and engine building. With only four rounds, the game is over quickly, but during the production phase there are plenty of decisions to make. What card do you keep to construct and what card do you keep to recycle for resources? And what cards are you passing on to your neighbor? Do they need them and are you giving away cards that you can use?

I liked how the production phase integrated its supremacy bonus into play. Nobody is ever shut out of gaining resources, but the player producing the most of each gets a character token. These tokens may be used to meet a building ‘s construction requirement or as victory points.

It’s A Wonderful World is a smooth-running engine builder with terrific dystopian-like artwork and solid components. For solo gamers, there are a few easy-to-implement rules changes for a beat-your-high-score variant that I found highly enjoyable. With a relatively quick play time of 45 minutes or less, It’s A Wonderful World is an excellent choice for a next-step engine builder for those who are looking for something more challenging than Splendor or Gizmos.

Thanks to Lucky Duck Games for providing a review copy of It’s A Wonderful World.

Ruel Gaviola is a regular contributor to Geek & Sundry, The Five By, iSlaytheDragon, That Hashtag Show, and other sites. His name rhymes with Superman’s Kryptonian name. You can find him talking about board games on Twitter or Instagram. 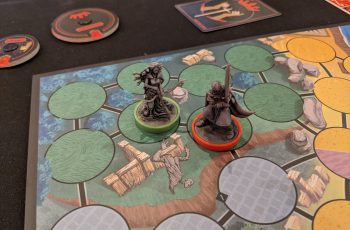 Hello fellow gamers! This is the first of my series … 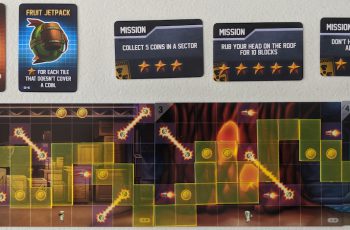 Join Barry the Salesman once again as he breaks into …