I know little about Green Arrow outside of the CW show, and I know even less about Hal Jordan and the Green Lanterns outside of the Ryan Reynolds movie (so nothing really). I heard Green Lantern Issue 8 was a new story arc, so I thought I’d give it a try, especially because Arrow is involved.

DC has been doing a great job with its dual covers. One is generally more traditionally drawn and matches the issue, while the B cover is more artistic and representative of poster quality. Lantern doesn’t disappoint. The main cover is simple yet effective in teasing what will happen in the coming pages. The B cover is a wonderfully drawn and colored image of Hal wielding a sword from his ring.

I swear this opening page is straight out of Star Wars. Hadea Maxima looks like the Cantina and the demon yelling the loudest looks like Jedi Master Saesee Tiin. It sets the stage for what our heroes have to deal with later, but it also sets the tone for the whole issue. There is a sharp whit to this title that was fun. The denizens of the room are told because of the planet they are on, killing is just fine, so the Tiin look-a-like sprouts gun barrels from his chest and mows down nearly everyone present. His attitude afterwards is – meh.

We jump to Earth where Green Arrow and Green Lantern bust up a crime before talking back at Ollie’s place. I am sure I am missing things as they chat, but the camaraderie between the two is very well done. I loved the banter these two engage in through out the issue. It shows how well they know each other and how well they team up.

Oliver is an Earth hero. He defends his city and helps the Justice League when needed. Hal, however, is a hero of the cosmos and spends his time and adventures in space amongst the super-powered. This difference is used frequently in the banter back and forth to great effect.

Who are the Whispy Dudes?

One thing I really did not understand were the wispy dudes throughout Green Lantern Issue 8. They seem to be Ollie and Hal, except they are extremely thin and wavy. They also talk a language readers cannot read and lacks captions. Are these the Xeen Arrow and Xeen Lantern? I am sure past knowledge would help here, but in the end it means little outside of Ollie’s attachment to Xeen Arrow.

In the end there were some things that confused me in this issue, but it did not detract from the fun. Ollie and Hal make for a great team, and with Arrow no longer having its own title, I hope to see more Oliver Queen in these pages. They really do make a great team. This is a good issue to start with if you have any interest in Green Lantern. 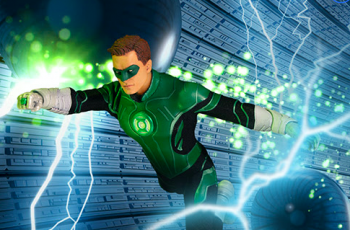 Diamond Comic Distributors and Mezco Toyz have once again partnered … 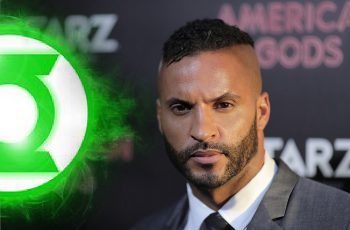 News for DC’s Green Lantern Corps movie has been quiet …