The woes continue for Solo: A Star Wars Story. Solo suffered another Meg-a blow this week when the August box office numbers came out. It seems Shark: A Statham Story (a/k/a The Meg) has already surpassed the total Solo box office draw. The Meg, mind you, has only been out in theaters since August 11.

As we already know, the Solo box office returns were well below par for a Star Wars film. When the dust settled on the Solo box office run, the film had earned just shy of $400 million world-wide. The Meg, on the other hand, has already racked up $411 million while (as Cinema Blend states) climbing its way to the top of the summer charts. So how did it do it?

Well, first and foremost, the movie fully overachieved during its opening weekend, surprising the industry during what is normally a slow month for movie-goers. Keep in mind, most families are readying for the upcoming school year by mid-August and have other priorities. That didn’t stop The Meg from pulling in over $45 million it’s opening weekend alone. Where The Meg shined, however, and Solo didn’t, was overseas.

Apparently the foreign market really loves shark films. I mean, really loves them. If the figures Box Office Mojo reports are correct, The Meg has garnered more than 75% of its total haul oversees. Unfortunately for Solo, oversees is where it floundered, ultimately making it the second to lowest-grossing Star Wars films ever. (That doesn’t account for inflation, however. In inflated numbers, Solo sits squarely in the Lucasfilm basement.)

The Meg had one other, notable advantage over Solo. Whereas Warner Bros. Pictures released The Meg in mid-August, with no discernable competition, Disney inexplicably released Solo Memorial Day weekend against not one, but two blockbusters from its own studio!  Disney’s mismanagement of Solo’s production and marketing is well documented. Now, that mismanagement has led to a shark movie, one that also features that annoying beet farmer guy from The Office, clobbering Han Solo’s backstory.

Recently in a video interview for GQ Sam Jackson talked … 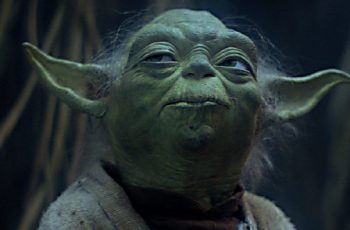 Have you ever wondered how Yoda survived Order 66 and …