The best money launderer around takes on the biggest job of his career, but can he do it without things going south?  Find out in this week’s Comic Rewind, The Rinse Vol. 1.

Money laundering is the process of taking “dirty” money and making it “clean” and usable.  Here is an example: you rob a bank and you of course want to spend the money, but if you suddenly buy a $1 million car it will look awfully suspicious.  However, if you take that money and slowly add extra income to your lemonade stand then it looks like you earned that money and you can now spend it.

Jeff Sinclair was the go-to guy for all your dirty money needs.  He’d take your “dirty” money and filter it through shell corporations, dirty banks and investments.  However, Sinclair didn’t do it for the money or power. He loved the challenge and danger of the job.

One day a man came to him with the biggest job of his life.  Hank Winslow stole $25 million from his boss and owner of the El Paradiso Casino, Steve Maxon.  Oh and also Winslow stole Maxon’s wife, Cherri. Maxon was not the dorky millionaire, but was more the mob connected casino owner akin to Las Vegas’ early days.

Sinclair took the job and immediately had Maxon’s goons and a tenacious IRS agent on his tail.  Shaking them proved to be quite difficult and this job was shaping up to be the hardest of his career.

The Rinse Vol. 1 was written by Gary Phillips with art by Marc Laming.  BOOM! Studios published the volume in 2012.

Rinse Rinsed Out The Heart and Soul Of Crime Noir

I need to fit in a crime noir comic to my Comic Rewind every so often.  It is important to me to look for lesser known noir comics in the hope I will find another amazing comic.  However, this didn’t quite do it for me.

The key elements of a good noir are all there.  It has a cool antihero, a beautiful woman and finally the plan going to crap.  The only piece which was missing was a femme fatale, but it can’t have everything.  However, the problem is it felt very paint-by-numbers.

An important element and perhaps the most important this volume was lacking was a soul.  All the characters felt very one dimensional. Sinclair was the character with the most personality, but even he felt like a caricature of a noir antihero.

I never exactly understood how Winslow got the money or why he took it.  Maxon is a very dangerous and he took a huge risk just by taking the money let alone stealing his wife.  The romance between Winslow and Cherri was never explained. I would love to see how and why they fell in love.  The entire volume I was expecting Cherri to double cross Winslow and Sinclair, but I was denied that pleasure.

On a positive note this comic does a really good job explaining what money laundering is, why it’s important and how it works.

Alienated #1 Preview: A Comic On Power And Responsibility 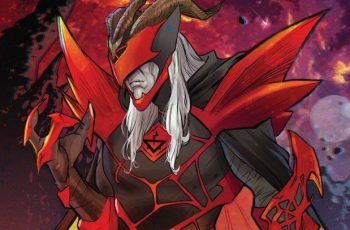 WonderCon is coming up soon, and while it hasn’t yet …