With us only being a few months away from STAR WARS: The Rise of Skywalker, most of the recent news has been centered around the end of the Skywalker saga. With reports the last few days saying that Disney moved too fast in producing STAR WARS movies, it didn’t look like we were going to get any news on new and upcoming projects for a while. Well, guess what? That all changed today. In an interview with Walt Disney Studios co-chairman Alan Horn, The Holiday Reporter has learned that Kevin Feige will be working on a new STAR WARS film. Here is what Horn had to say:

We are excited about the projects Kathy and the Lucasfilm team are working on, not only in the terms of STAR WARS but also Indiana Jones and reaching into other parts of the company including Children of Blood and Bone with Emma Watts and Fox. With the close of the Skywalker Saga, Kathleen Kennedy is pursuing a new era in STAR WARS’ storytelling, and knowing what a die-hard fan Kevin is, it made sense for these two extraordinary producers to work on a STAR WARS film together.

What does the future hold?

Well, right now that is a good question. What does the future hold? With Kathleen Kennedy’s contract with Lucasfilm ending in the near future, could this be a stepping stone for Kevin Feige to take control of the STAR WARS universe? Feige’s resume is not to shabby. With Marvel, he has four of the top ten movies ever released, including Avengers: End Game, which passed Avatar to become the number one grossing movie of all time. Also, this raises the question of what the future looks like for Dave Filoni. A lot of fans were hoping that he would be the one to take STAR WARS in a new direction. Whatever’s going to happen probably won’t be revealed until after The Rise of Skywalker is released.

So, what do you think of Kevin Feige working on a new STAR WARS movie? Who would you like to see take over the STAR WARS franchise? That Hashtag Show wants to hear from you.

You can let us know by hitting us up on Twitter or me @starwarsnerd574. 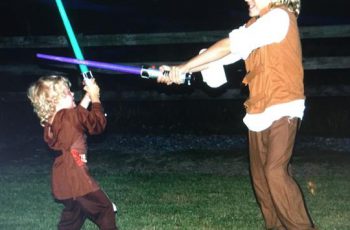 On April 30th, 2019, a gunman opened fire in a …
Yesterday we received the official casting announcement for Star Wars.  …