Power Rangers RPM slowly built up its team over the course of it’s season, By the season’s end, they had a complete team of seven. It seems, however, that we were originally meant to get an eighth Ranger. That was none other than Tenaya 7.

Tenaya 7 could have been a Ranger

Adelaide Kane, who played the character of Tenaya 7, appeared last year at Power Morphicon. In a RPM cast panel, Kane joked about her character not getting a Morpher after being redeemed. (Plus the team was missing a Pink Ranger.) Later in the panel, a fan asked about their thoughts when it the show changed executive producers from Eddie Guzelian to Chip Lynn. The fan also inquired how that changed the show. Kan stated that the change was hard. The new producers dropped a lot of material. including how Tenaya 7 would have gotten a Morpher.

This somehow slipped past most Ranger fans. Notwithstanding, it looks like Tenaya 7 should have become a Power Ranger and joined the RPM Rangers after her redemption. Adelaide becoming a Pink Ranger would have been a great addition to the team. It also matches RPM’s style of building up Rangers and making them more connected with each other. (That is, instead of random citizens getting Power Ranger powers). Her being a late addition to the team most likely means she wouldn’t have received a Zord. The fact we could have gotten another original Ranger not seen in Super Sentai could have been amazing.

The cast also spoke about the many dropped storylines and easter eggs that were built up before the transition. Maybe eagle-eyed fans can go back to the series and find hints of this original storyline with Tenaya 7 becoming a Ranger. We can only speculate about what the series would have been like with an eight Ranger added to the team. Maybe we can still see Tenaya 7 become a Ranger in a Boom Studios comic later on and give us this lost Ranger Story.

Do you still want to see her become a Pink Ranger? Let us know in the comments below. 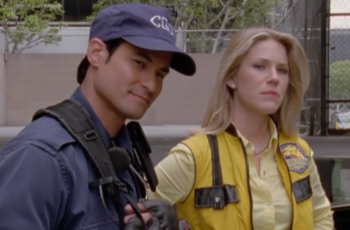 Friendships come in all shapes, color, and monsters. A real …