There may not of been a lot of STAR WARS news that came out of SDCC this year, but the one thing that did get fans talking was the introduction of the Sith Trooper. This Red and Black trooper has raised a lot of questions. Where did they come from? How are they connected to the Sith? Is there a connection to Palpatine? While we still have no official answer on their role in STAR WARS: The Rise of Skywalker we may have gotten a small hint from a Making Star Wars report.

So, according to this report from Making Star Wars the Sith Troopers have been around for a long time. Hiding out in “hellish” and “not entirely stable” unknown regions. These Sith Troopers who are still under the control of Emperor Palpatine and have been awaiting their next mission. Also in this report it says that “Since Emperor Palpatine’s death the fleet has been dodging gravity wells and surviving in the wilderness of space in the unknown regions waiting to be found.”

OK this is where the report gets really interesting. So according to Making Star Wars Kylo Ren needs a “Wayfinder device.” This report also goes on to say….

“The fleet is the key Kylo Ren needs to unlock Palpatine’s legacy. Kylo gets this device from an alien that looks like a spider with an infant’s face that acts as an oracle. This is sort of a Pandora’s Box for Kylo it seems as he thinks he’s getting himself something powerful that answers to him but Palpatine is not so willing to share his toys with anyone. Palpatine’s contingency plans weren’t to make sure Darth Vader’s grandson received his inheritance.”

So what does this all mean?

Again I want to put it out there that this is all rumors until either Disney gives us more information or when we see it in the theaters. But I really do find all this interesting. Who are these Sith Troopers? Could they be part of the old clone army? I feel that Kylo Ren has known about the army and has been prepping them for battle but just like ORDER 66, the Sith Troopers won’t begin their mission until they are ordered to by Palpatine himself. Well I guess we will just have to wait until December to find out.

So what are your thoughts about the Sith Troopers? Do you think that they are connected to Palpatine? Well we want to hear from you. You can do that by hitting us up on Twitter @thathashtagshow and myself @starwarsnerd574. Also make sure to stay up to date on all the Star Wars news by following us at ThatHashtagShow.com. I can’t wait to see you all next year at STAR WARS Celebration.

So, after my 5th showing of STAR WARS: The Rise … 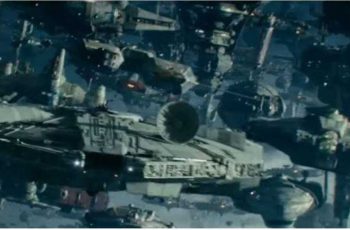 Well with the last trailer for The Rise of Skywalker …