Oscars.org is hosting two events this week featuring both Rogue One and A New Hope. Both events involve the original theatrical cut of Star Wars. Thus, once once again, events give rise to the hope that we’ll finally get the original versions for home release.

On June 27, Oscars.org is hosting a rare event: Galactic Innovations: Star Wars and Rogue One. The event will feature the creation of the amazing visual effects in the original and most recent Star Wars films.

“This event will contrast the analog technologies developed for the first Star Wars released in 1977 with the all-digital toolsets used to create Rogue One released in 2016. Key contributors from both Star Wars and Rogue One will share the journey of creating the impossible with their breakthrough visual effects.”

The event will feature many of the original creators of the visual effects of both movies. It will contrast the analog technologies with the digital technologies between the new movies. Fans will get a chance to see the tricks used to bring the movies to life.

The Samuel Goldwyn Theater will host the event. (Sorry, no more tickets are available.) But standby is available, and the event will be live streamed on Oscars.org.

Oscars.org to show Rogue One and Original, Theatrical Cut of A New Hope

On June 29, it will also host a rare showing of Rogue One and A New Hope. This event is also sold out, with a standby line available. Tickets are only $5.

Join us for a rare and exclusive viewing of Star Wars (1977) and Rogue One (2016), featuring a 70mm Academy print of the original film. These two movies are intrinsically connected, as Rogue One tells the story of how Princess Leia received the Death Star plans that allowed the Rebel Alliance to destroy the Death Star in Star Wars. Bring the family and enjoy this double feature at the Samuel Goldwyn Theatre.”

Yes, you read that correctly. They are showing a print of the ORIGINAL film… as in not the Lucas-enhanced Special Edition. Speculation about whether we’d finally get the theatrical versions of the original trilogy began to rise again when Fox merged with Disney. Let’s hope this resurrection of the original cut is a precursor to that happening!

In any event, watching Rogue One and A New Hope back to back is a must prior to watching The Rise Of Skywalker. And there isn’t a better venue than the Samuel Goldwyn Theater, especially after a deep dive in the video effects.

Star Wars is over 41 years old. It’s hard to comprehend … 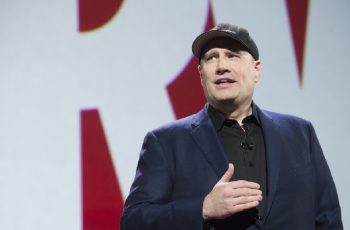 Could Kevin Feige be the next to take STAR WARS …