Star Wars fans are constantly speculating about the plot of the final installment to the Star Wars “Skywalker” Saga. Even though they only have a teaser trailer, some photo leaks, and some random tweets to go on. One of the most provocative debates is whether Kylo Ren will come back to the Light Side.

A recent article from nerdist.com makes a strong case that a proper conclusion to the saga demands that Kylo Ren forsake the dark side. The author makes the argument that the entire Star Wars story follows the pattern of storytelling in mythological tales. All of these tales have the foundational theme of redemption in common.

But will Kylo Ren continue the pattern of character redemption and forsake the dark side in Episode IX?

Many of our favorite characters’ story arcs have pinnacled with fulfilling stories of redemption. The most prominent of these is Anakin Skywalker. From The Phantom Menace to The Return of the Jedi, we witnessed the energetic force-sensitive slave become a powerful Jedi Knight. Then we abruptly witnessed his fall to the dark side, to become Darth Vader. But at the very end, Vader becomes Anakin Skywalker again as he sacrifices his life to save Luke’s. This act was the culmination of his story arc: the final act of redemption.

Rogue One was another example where virtually every major character experiences significant progression that culminates in redemption. Right after it came out, I wrote an article that detailed the redemption stories of 5 of the main characters. Galen Erso redeemed himself by planting and exposing the Death Star’s fatal weakness. Bodhi Rook redeemed his complicity in Imperial cruelty by defecting with Galen’s message. Saw Gerrera redeemed his failure to keep the Ersos together by connecting Jyn with her father, moments before his death. Cassian Andor redeemed his vengeful, violent past by sparing Galen’s life and saving Jyn’s. Finally, Jyn Erso redeemed herself from a spiteful, selfish criminal to a valiant leader and martyr for the rebel cause.

Does this precedent mean that Kylo Ren will follow suit, and perhaps even become Ben Solo again? Star Wars writers, like all writers, love to drop hints at pivotal points in the story to forecast future events. We can certainly find several hints indicating that redemption for Kylo is a distinct possibility.

Kylo idolizes Vader. If you have any doubt, just remember that Vader wore a helmet to stay alive, but Kylo only wore a helmet to be like Vader. There are many parallels between Kylo and Vader that suggest a final redemption is likely.

“I will finish what you started”

Although this line was meant to be sinister in nature, it certainly could have multiple meanings. Anakin Skywalker started the fulfillment of the “Chosen One” prophecy, will Kylo be the one to finish it?

“No one is ever really gone”

Star Wars writers are having fun with this quote. A preliminary version of this quote was actually given in the new Thrawn novel by Timothy Zahn. “If one is remembered by a friend, one is never truly gone.” On face value, it seems that Luke used these words to console Leia about Han’s death. If she retains her memories of him (you know, the ones that weren’t “all bad”) then he will live on through her. However, these words could just as equally apply to Kylo Ren. Just because he has abandoned his roots, he is never really gone. He can come back. But how?

Production only began less than a week ago and the … 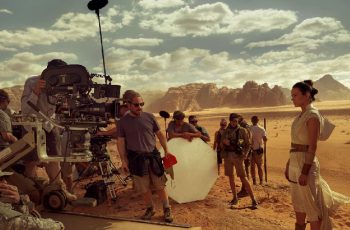 There’s no question that the Star Wars sequel trilogy centers …