A lot of people are griping about Game of Thrones Season 8, saying it is one of the worst seasons. I do not know that I’m that surprised when the biggest story from Episode 4 was the Starbucks cup. I think this is more the troll culture than truth, but here are 6 brilliant things that stood out from episode 5.

People are complaining about the writing for this season. I don’t get it when we have scenes like we had in this episode. Three different scenes I thought stood out, especially as I watched it the second time.

Tyrion and Dani – I loved the scene early on between Dani and Tyrion. Tyrion’s heart is once again in the right place, but once again it’s getting him in worlds of trouble. He continues to pledge loyalty to Dani despite everything that continues to go wrong. The make-up artist did an amazing job on Dani’s make-up. She truly looks like someone not eating or sleeping as well as someone who is going off the deep end.

Tyrion and Jamie – Let’s face it. Peter Dinklage is all but guaranteed another Emmy this year from this episode alone. Tyrion and Jamie have a normal conversation, but then Tyrion opens up about everything Jamie and his support over the years has meant to him. It really was a touching goodbye between brothers. Jamie and Tyrion are probably the only two Lannisters to have a normal, healthy relationship together.

Arya and Sandor – These two have had such a relationship throughout the show. Most of it has been contentious and as enemies. You thought there was some respect growing between them, but as he lays there dying, Arya robs him. In this scene though, Sandor tells Arya to turn around because Cersei is as good as dead no matter what happens. He even demonstrates this by letting Cersei walk right by him instead of killing her. Arya telling “Sandor”, not “The Hound”, Thank You was touching. I loved this scene.

Did anyone else notice the music for this episode? It was incredible! This deserves an Emmy as well. As tensions mount during the pre-fight line-ups, the music picks up. The constant, hard strumming like a heart beat added so much to scenes. Soldiers move around. Citizens push through the main gate. Fighters become ready, yet the drum beat continues. The length they used it also adds to the tension. The fact it goes on and on for several minutes helps fry nerves before the battle.

The music quits when the city gates are closed and the people panic, but notice it returns when the slaughter in the streets begins. The music really stood out to me the first time I watched it as it added so much.

The Game of Thrones Live concert series is going back … 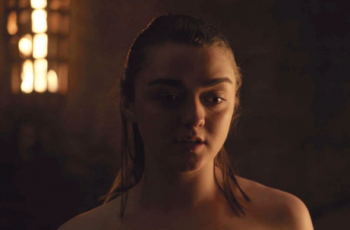 Did your jaw drop during episode 2 when Arya and …