With all the live action remakes and video game movies, you knew Pokemon would take a shot at the big screen in a form other than cartoon sooner or later. The question is could they find a way to make it appeal to everyone and not just the Pokemon fans. Pokemon fans date all the way back to the release of the first game back in 1995, but it takes more than any fan base to make a movie a success. So, the question is, how will Detective Pikachu fare with audiences?

Off To a Positive Start

Critics in question were brought to Japan and wined and dined for the release. Take it with a grain of salt, but early reviews are overwhelmingly positive. DP appears to have hit all the right notes to keep fans entertained, yet tells a quality story to entertain everyone else.

Early trailers gave the film an almost Deadpool 3 feel to it. Ryan Reynolds, who voices everyone’s favorite little, yellow buddy, sounded like he was doing his typical Deadpool shtick. This time he went from red and black to yellow and black. Instead of fighting cancer, he is fighting kidney stones. Every time he has to pass one he has to scream pika- CHUUUU!!!

It is what Ryan does best, but @terri_schwartz says Reynolds does a great job making Pikachu different from the Merc with the Mouth.

The hard part is that Detective Pikachu comes out May 10th. While this is a good two weeks post- Avengers: Endgame, Endgame is promising a massive take-over of the box-office. Endgame may hamper some of Pikachu’s box office. If word of mouth and reviews remain this positive, you can bet there will be sequels coming down the line.

Perhaps the biggest key to making movies like this a hit is changing the dynamics of the cartoon. In the cartoon Ash is a trainer that runs from gym to gym challenging, and usually beating, pokemon trainers and their latest Pokemon variant. Had this movie tried to reenact that, its success may not have come so easily. Changing the way everyone’s favorite creatures interact with the world opens up many more possibilities.

Straight From the Pokeball

Here are some more reviews from critics that were able to see it: 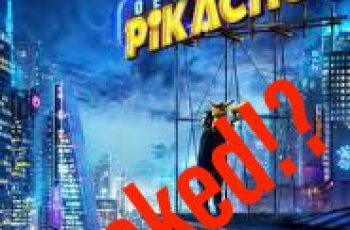 We’re only days away from the premiere of Pokémon: Detective …
Detective Pikachu is the world’s first live-action movie based on …