What felt like it was set to be a boring Batman retrospective panel ended up delighting WonderCon fans. Greg Capullo, Tom King, Joëlle Jones, and Scott Snyder kicked off the panel by revealing the future of the Dark Knight for DC comics.

Leading off the reveals, artist Greg Capullo premiered the first image of the new Detective Comics logo to cheering fans. The new logo will make it’s debut on the cover of Detective Comics 1001. Capullo seemed like a proud papa when the image hit the screen, claiming he wanted to put the “Batman” back into Batman’s Detective comics Logo. And he did.  Literally.

After, a giddy Scott Snyder took over the reins of the Batman panel to discuss (gleefully babbling) about a story his been working on for over 2 years. He’d only finished writing it the day before this panel. The ominous comic title: “Batman: Last Knight On Earth.”

Snyder drew inspiration for the story from a conversation Snyder had with the legendary Grant Morrison. He had told Scott, “Give your Batman a Birth and a Death”. This is how Scott will give Batman his death. The comic is set 15 to 20 years into the future as Batman is trying to track down someone who is drawing a giant chalk-outline of batman’s body around Gotham… twenty feet at a time. At the heart of this 365 piece body is crime alley, where Bruce’s parents died and Batman was born.  When Batman visits there he finds a dead child and someone knocks him out by mysterious means.

A Dark Future for Batman

When he awakens, he’s in Arkham, finding his Batman days have been a delusion for years. Even Alfred believed him to have been delusional and all his heroics figments of his imagination.More disturbingly, people believe he is the one who killed his parents in crime alley, years ago. Finally, his captors show him his “suit”: a straight-jacket and an electrocution helmet.

Get ready for things to get weirder. In a moment seemingly inspired by the game Lollypop Chainsaw, Batman will find the Joker’s head (still animated) and attach it to his belt as he treks through this dark comic, hitting stands in May.

When Snyder stopped for a breath Tom King and Joëlle Jones got their turn to speak at the Batman panlel. While not as revealing in details as the others, they did say that there were still big plans ahead for the Batman/Catwoman relationship in the Batman comics. Back in the planning stages, Tom King pitched his 100 issue arc with the thesis “Batman loves Catwoman and Bane is Bad”; he wanted Batman and Catwoman to marry, but Joelle said no. Meanwhile, in her current Catwoman run, Selina Kyle doesn’t seem to know what Bruce Wayne is doing; they heavily hinted a reunion is coming by the end, saying, “Batman and Catwoman are part of a bigger plan.”

Straight from the pages of the bestselling DARK NIGHTS: METAL comics series … 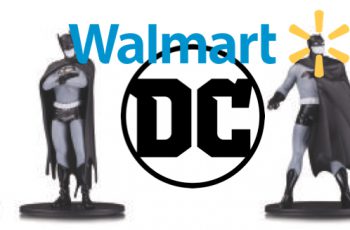 To everyone’s surprise, the Walmart line of DC comics have …