Have you ever wondered what would happen if the clones from Star Wars were to have been the ones to raise Superman? My guess is no, but the new comic from Image comics may be posing a similar proposition.

Oliver is Image comics newest title written by Gary Whitta, with artist Darick Robertson and colorist Diego Rodriguez. For those who think Gary Whitta sounds familiar, he helped write Star Wars: Rogue One, After Earth, The Book of Eli as well as work on several Walking Dead video games. That actually provides a great set up for what we are walking into with this title.

I love the artistry of this title. It is very rich in detail, both within each object depicted and the environment as a whole. The coloring, or limitation there of, helps set the tone for the environment for the world we are entering. We are given splashes of color here and there, but the largest part of the color palette stays in the blacks, grays, and muted greens and browns.

This title begins in future London – post apocalyptic London to be exact. This is where the great artwork comes in. The detail of the London ruins is rich and includes many major landmarks to drive home the wasteland it now is.

A lone figure in an environmental suit wanders these wastes as we are given a pretty description in silver words of beauty. For three pages the figure wanders. While the pages are largely empty, that is the exact point. It drives home the disaster that befell London. The figure wanders aimlessly until collapsing before a gang of men with scars on their faces and dressed in what looks to be casual military fatigues.

The face mask is removed only to reveal a woman with long, flowing hair. Why is this important? Every other figure, save the one in the environmental suit, is male and bald. The woman passes out. A person cries out for someone and we are immediately thrust in the midst of child birth.

Unto Us a Child Is Born…

A colonel Fury looking soldier with a patch over his eye seems to know how to assist in a birth when the men around him appear clueless. He cuts the umbilical cord is cut, and shortly after the woman passes away. What becomes interesting here is the reaction to the baby that comes next.

As ‘Fury’ holds up the child, both he and the fellow soldiers look upon the baby high as if it is some grotesque, hideous monstrosity. All we see is the backside of the child and it appears perfectly normal. Is there something to the child’s face that is misshapen? Or is there something else we aren’t allowed to see that is abnormal? This is clue #1 that something is amiss.

‘Fury’ and a guy that looks like he lost a fight to Wolverine, due to the claw marks on his face, get into an argument over the child’s fate. Most think the child should be destroyed. There comes an interesting tidbit from scarface where he states “not a human child, nor is he one of us.” This tells us a couple of things. There are humans, but they are not present. These soldiers are something other than human, and this child is neither human nor of the soldiers’ breed.

This dialogue does a lot of things to set up this world and bring it depth. There is a human world and these soldiers are not a part of it. If fact these soldiers seem to be their own isolated world that works differently that the other side. Many of these differences are left vague, but it sets up two societies that do not intermingle. This child also strikes fear into the hearts of the soldiers. They don’t want a simple baby, but yet several talk about the deaths of children during the war, and how they do not wish to see this child die by their hands, or human hands, since the soldiers think they too would kill it.

A quick leap to this last sentiment and ‘Fury’ ends the debate with the decision being to raise the child as one of them. Then there is a cute scene that also shows how foreign children are in the first place. They look through books to find a name for the child. The soldiers can’t even tell the difference between a male and female name. Finally, ‘Fury’ come sup with – Oliver.

It is this next series of pages that make this whole mystery so much more fascinating. We are given a banner that states three years of past; However, a child, appearing to be about 10-12 years old, is racing down the streets. No big deal until we ‘Scars’ chasing after him, yelling out Oliver! In a mere three years, the baby has tripled in physical age.

As if that were not odd enough, we see Oliver evade capture by leaping a pile of junk three times taller than he is. ‘Scars’ chases him across the roof tops, but when Oliver runs out of room, he takes a broom handle and proceeds to vault some 20+ feet to the next roof top.

Now this could be normal athletic abilities for whatever this child is or the soldiers are, but the total shock on ‘Scar’s’ face shows these are incredible fetes of athleticism that are not normal even for them. This kid is special form anyone’s book.

Oliver ends up sliding into ‘Fury’ and is forced to give back the service medal he took from ‘Scars’ who is understandably pissed.

I love this next scene where Oliver continues to carry and spin the stick he used to pole vault the roof tops. ‘Fury’ tells him to make it useful and tosses him a broom head to fasten. Great subtle way for the creative team to show the father/son bond between the two.

Oliver asks why he is different, and it is here that we get some of the backstory of this Earth. They hike to a point where they can overlook the wreckage of the London Eye Ferris wheel. ‘Fury’ shows what London used to look like and begins his story.

‘Fury’ tells of the war that destroyed London. The soldiers were all combat clones, created to wage the war. The war raged with them at the front lines. When Oliver asked who won the war, ‘Fury’ states no one did. The war just ended when there was nothing left to fight over. There is also a depiction of what looks like a nuclear explosion, which would explain the poisons that the soldiers could survive – nuclear radiation.

The soldiers were considered less than human and without rights, so they were banished from the human world and forced into the badlands since they could survive it.

Oliver was different because he was not born in a lab. Again we get a nice little bonding scene as Olive says they are similar because neither had a mother. It is when Oliver asks about why he has not died from all the poisons that ‘Fury’ shuts the conversation down.

In a discussion with another officer that night, ‘Fury’ reveals he only told Oliver what he “needed to know”. The other officer then wards there is more to be told and if ‘Fury’ lies about it, Oliver may hate him.

So we have a boy who is neither human nor clone, living with a bunch of ex-military clones with powers beyond either. He lives in a land desolated by war. Of course what is a kid with powers without an enemy to define his journey? This issue has done an amazing job setting up a world with tons of answers to find and what looks like a fascinating journey yet to come. 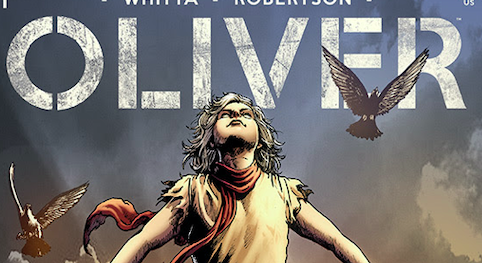