The 2nd season of Lost In Space still doesn’t have an official release date and fans of the series have been clamoring to find out the fate of the Jupiter 2 and the Space Family Robinson. Legendary Comics has teamed up with Netflix to release a Graphic Novel expansion of the show and Volume One is now available. The series will provide additional adventures to help tide over the audience until the new season drops either later this year or early 2020. Volume 2 will release in Spring of 2019. 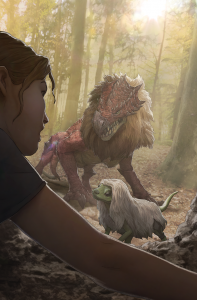 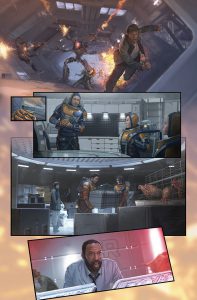 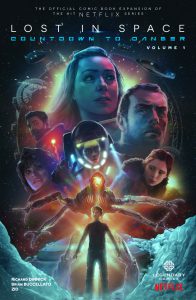 For more information on the book, check out the press release below.

Volume One features thrilling all-new, untold adventures of Will, Penny and the Robinsons

The first volume of LOST IN SPACE: COUNTDOWN TO DANGER, the official four-part comic book expansion of the hit Netflix Original Series, launches in comic stores and online today. The thrilling graphic novel from Legendary Comics features all-new, untold adventures of the full crew and invites fans to dive deeper into the backstories of their favorite heroic characters—including the Robinsons, Robot, Doctor Smith and Don West. Volume One features two new stories centering around Will and Penny: “Secrets, written by Richard Dinnick, and “Penny & Judith,” written by Brian Buccellato, with all artwork by ZID.

LOST IN SPACE is set thirty years in the future. En route to a distant colony, the Robinson family finds itself thrown off-course when their ship crash-lands on a mysterious and dangerous planet. On this strange new world, they encounter a hostile environment and an enigmatic alien robot. In order to survive, the Robinson family must rely on their training, and they’ll discover that no matter how lost they are, their family is their home.

The new graphic series offers readers the chance to explore new missions, not aired on television, as our heroes struggle to survive in an unknown world full of new creatures, unexpected visitors, and new danger. Volume Two, set to be released in Spring 2019, will continue the adventure with a focus on fan favorite Robot and Doctor Smith, played by Parker Posey. For the latest Legendary Comics news and updates, follow:Facebook.com/LegendaryComics.

About the Lost in Space: Countdown to Danger creators:

Richard Dinnick is a writer of television scripts, books and comics. He is the creator of new crime drama Surface Tension for Chrysalis Vision and Legendary Comics’ Rob (a new twist on the Robin Hood mythos). He has written on several television shows, including the forthcoming final series of “Thunderbirds Are Go!” for ITV and Amazon Studios. He is writing the tie-in comic for Netflix’s hit show “Lost in Space”—also for Legendary Comics—and has several Titan Comics’ Doctor Who series under his belt for the 7th, 12th and 13th Doctors. Richard has also written several books for BBC Books including Doctor Who: Underwater War, Doctor Who: Myths & Legends and Doctor Who: The Missy Chronicles.

Brian Buccellato is a New York Times best-selling writer best-known for his work on Flash and Injustice for DC Comics. Brian started in comics as a colorist for the Marvel/DC crossover Punisher/Batman and went on to color for all the major publishers, including work on The Uncanny X-Men, Superman and The Flash. He began writing as part of The Story Company, where he collaborated on a number of screenplays. Buccellato started his comic writing career at Top Cow with The Darkness before teaming with Francis Manapul to co-write The Flash and Detective Comics at DC. He is the creator of Foster, Sons of the Devil and co-creator of Cannibal for Image Comics. His most recent work includes Lowlifes from IDW and Lost in Space: Countdown to Danger for Legendary. He currently lives in West Hollywood with a very small cat and dog.

ZID is a multidisciplinary artist whose work ranges from painting, card games and animation, to pre-production concept art. He has exhibited large-scale works in canvas, but his true calling has always been the visual storytelling medium known as comics. After a good half decade working in studios, ZID is now freelancing and has found a home at Legendary Comics after his involvement in Michael Dougherty’s Trick ‘r Treat: Days of the Dead anthology graphic novel. Since then, he has worked on Legendary’s Spectral: Ghosts of War (the prequel comic to the movie of the same name on Netflix) and Skull Island: The Birth of Kong. Find him atwww.mohammadyazid.com

Legendary Television is currently in production on the second season of “Lost in Space,” the Netflix Original series based on Irwin Allen’s classic 1960’s science fiction series starring Molly Parker (“House of Cards”), Toby Stephens (“Black Sails”) and Parker Posey (Café Society). In this modern update, the science fiction show follows the Robinson family as they fight against all odds to survive after crash landing on an alien planet and finding themselves surrounded by hidden dangers.

Legendary Comics was born out of a passion for mythic entertainment, seeking out new talent and working with the best and the brightest in the industry to create transportive worlds, inspirational characters, and spectacular adventures that leap off the page. Founded in 2011, Legendary Comics has produced an exciting catalogue of original titles that continues to grow and evolve. From partnerships with industry legend Frank Miller to Grant Morrison’s Eisner-nominated Annihilator, Legendary Comics has a passion for innovative new stories, including Marc Guggenheim’s The Adventures of Jonas Quantum, the fantasy action series A Town Called Dragon, and Jessica Chobot and Erika Lewis’ hit webseries, Firebrand: The Initiation of Natali Pressano. In addition to original titles, Legendary Comics also expands the scope of the cinematic universes of its parent company Legendary Entertainment, by bringing big-screen adventure exploding onto the comic book page. Working with the visionary filmmakers and the architects of Legendary’s Monsterverse, they have delivered the level of quality and authenticity our fans demand with New York Times best-sellers such as Godzilla: Awakening and Pacific Rim: Tales From Year Zero, and Skull Island: The Birth of Kong, to name a few. http://www.legendary.com/comics

It has been reported that Netflix is developing a sequel … 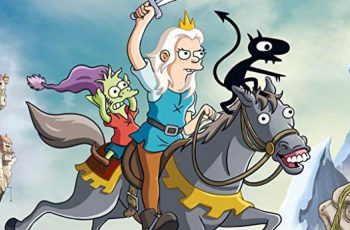 The long wait is over, well almost, we have a …