Strap on your holsters and hang onto your butts!  The dead zone of Star Wars is coming to an end.  While we have had some Resistance news lately , we are now getting news from the set of the newly titled series The Mandalorian. We have set pics.  We have the title and the synopsis from Jon Favreau himself.  Now, straight from Starwars.com we have the gunfighter himself!  Take a look:

This is so brilliant! I don’t know that they could have come up with a better suit.  It is everything we understand to be Mandalorian, but not so much that we are guessing at colors and meanings.

The colors are perfect.  If we saw blue or green or certain patterns, we would be so distracted with meanings, but its simple browns, tans and silvers.  It subtlety is what makes it pop. Of course its seen some wear and tear, but if a gunfighter doesn’t have damage you would have to question what he’s hunting.  He has the standard gauntlets (minus Fett’s extras), armor and cape.

The helmet though is a sharp silver color.  It lacks Boba’s antenna/comm piece, but that’s fine.  It has a very sleek look to it.  He sports an ammo bandoleer and a belt with some new items.

Perhaps the most intriguing part of the outfits of course the guns.  His hip blaster looks like a new model.  It either has a severely slanted grip or a stock of some sort similar to Boba’s. Unlike Han who wore his blaster low, its higher on the hip, so this new guy isn’t a quick-draw fighter.  Also, it appears that he does not favor the traditional Mando jet pack.  Instead we see a long, slender rifle stock emerging from his shoulder.  This would suggest a sniper rifle although it could be a heavy rifle.

All in all, this new armor is magnificent!  It is missing just one thing – the head underneath!  I don’t know we get this shot and yet have ZERO casting news.  The only real rumor we have is that the gun-fighter will be played by Pedro Pascal (seen below).  There could not be a better selection than Pedro, but of course he and his agent are adamantly denying any involvement.  Then again, in Hollywood talk that means he is most definitely doing it.

As long as there is Star Wars, there will be … 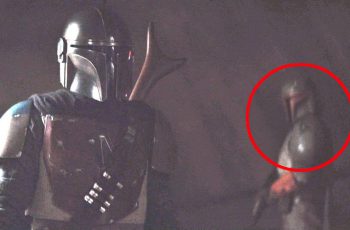 Episode one of The Mandalorian dropped this week, and as …