One of the most stunning moments from Star Wars: Revenge of the Sith was Palpatine issuing Order 66.  The clone soldiers that loyally followed their Jedi commanders suddenly turned on them after receiving the order.  The latest issue of the Darth Vader comic book attempts to further explain the reasoning behind it.

Toward the end of Star Wars: Revenge of the Sith, the Jedi discovered Supreme Chancellor Palpatine was their enemy Darth Sidious.  To prevent the Jedi from using the Republic’s clone army against him, Palpatine issued Order 66.  The protocol caused the loyal soldiers to attack their Jedi commanders.  This ensured the army answered only to Palpatine and removed the Jedi that could eventually defeat him.

The former Star Wars expanded universe explained the action of the Clones as deliberate.  The Order 66 protocol was a legitimate order to ensure the safety of the Republic.  While the soldiers respected their officers, they did not know if the Jedi were loyal the Republic.  Thus, the clones that executed the order had internal conflict, with some even ignoring the order and hiding the Jedi.

In 2012, The Walt Disney Company purchased the Star Wars franchise.  Disney removed the old expanded universe and relabeled it as Legends.  The animated series Star Wars: The Clone Wars revisited the cause for the clones’ action.  In the episode Conspiracy, the audience finds out that the clones were implanted with a bio-chip.

The cloning masters installed the chip under the false pretense that a single Jedi might go rogue.  The activation of Order 66 would instantly cause the clones to unthinkingly turn on their Jedi commander.  Therefore, the premature activation of a bio-chip and death of a Jedi almost caused the conspiracy to be revealed.  The attack was explained away as caused by a brain tumor to keep the plot hidden.

The newest Darth Vader comics revisit the bio-chip and unthinking clones.  Jedi Padawan Ferren Barr survived the initial purge of the Jedi and then hid himself and some acolytes on Mon Cala.  Darth Vader and the Emperor’s Inquisitors arrived on planet and eventually cornered Barr.

Barr studied history and specifically the role of the clones.  He loudly proclaims the Inquisitors’ history as former Jedi.

Barr then uses the Force to remove the Inquisitor Troopers’ helmets.  The troopers are clone soldiers.

Barr renounces himself as a Jedi by throwing away his lightsaber and calmly says, “Execute Order 66.”

Then the clones instantly turn on the former Jedi Inquisitors allowing Barr and his acolyte to escape.

Can any person issue Order 66?  Or did Barr use the Force to trick the clones into thinking the Emperor gave the order?  Either way, this scene reinforces the clones’ actions as thoughtless and machine like.

Some fans will be happy to know their favorite clone troopers did not knowingly betray the Jedi.  Others will bemoan the loss of the troopers’ autonomy.  The bio-chip turns the clones into little more than machines, not thinking humans with individual drives and desires.  Order 66 was controversial among fans when it first occurred, and it continues to be controversial even now. 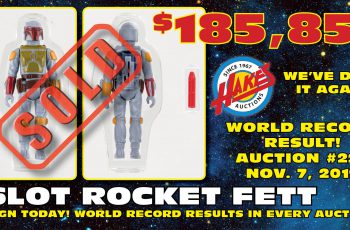 Last month we told you about Hake’s Auction for some …

Star Wars: The Rise of Skywalker is now just a …